Welcome to the tropics…

Where the weather isn’t the only thing that SIZZLES!!

Bombings, worlds apart, throw two survivors together. Troy, emotionally and physically damaged due to his last tour as a Special Ops soldier, is asked to protect Shayne from an unknown enemy. Is he up to the task? Can he keep his emotional distance from a woman who has become all too important to him?

Shayne Peterson cheated death when she survived a bombing at a Tampa country club. Still, she fights a nightly battle against the terror of being trapped under the rubble and her inability to identify the man who left the deadly package. After a move to Sanibel Island, she finds herself surrounded by former Green Berets. She feels safe—until it becomes obvious that she’s not.

A suicide bomber in an Afghani marketplace left Troy McKenzie, Special Forces soldier and former ladies’ man, disfigured. He should have died that day—punishment for his arrogance and misplaced trust. Unable to get past the memories and the boy he couldn’t save, Troy returns to Sanibel, seeking the support of his former brothers-in-arms.

Soon Shayne and Troy are battling their unexpected, and ill-timed, attraction to one another while staying one step ahead of a killer.

END_OF_DOCUMENT_TOKEN_TO_BE_REPLACED

Thank you for tagging along with me and “The James Gang”, a Special Forces team who finds as much action off the battlefield as they do on it. What could be better than alpha males, strong women, warm tropical beaches, and romance? You’re about to find out. I hope you enjoy the heat because things can get a little steamy here… 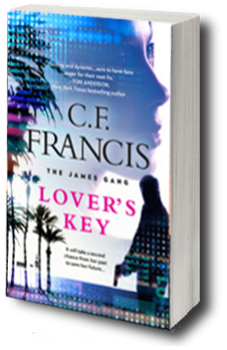